In the tiny village of Axpe, a wisp of smoke drifts from a stone farmhouse into the craggy grey peaks that hover over the valley. The mountains cut an imposing figure, creating an absence of horizon that feels at once cozy and claustrophobic. Sheep dot the landscape, all green and gray and white.

As common as this scene is to Basque Country, it is one that never ceases to be breathtaking. Less common, however, is the source of that chimney smoke. It spirals from a stone caserío, a farmhouse that now functions as a village tavern and restaurant. This restaurant, some 45 minutes from San Sebastián and 20 minutes from Bilbao (read, the middle of nowhere), just happens to be Etxebarri, the world-renowned culinary home of Victor Arguinzoniz. And that wisp of smoke is the byproduct of a cooking process that is so unique it has landed this wayside country restaurant on the pages of the world’s top press, from Bon Appetit to the New York Times, and garnered it the #34 slot on the World’s 50 Best Restaurants. 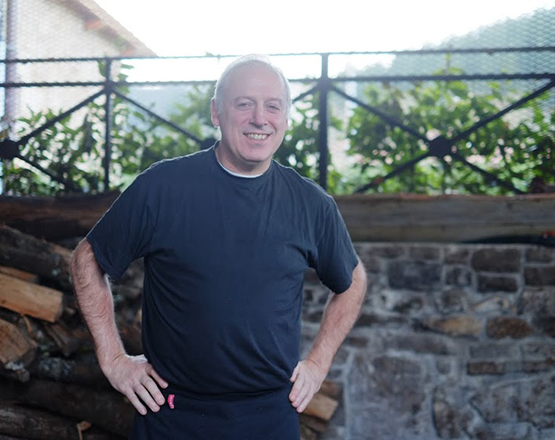 The origin of all the hype is the relatively humble kitchen, located on the bottom floor of the caserío. A screen door surrounded by stacks of dried wood opens to the action: a row of moveable grills, two airtight iron oven doors built into the wall, a big table in the center of the room, and a man wearing a T-shirt and an apron. That man is Victor, who spends every service grilling for clients that come from Bilbao, from Spain, from the USA and Japan to try his famous cooking.
Every morning begins with throwing logs in the oven, starving them of oxygen so that they burn down into hot embers. These are then used, as needed, under the grill racks that Victor moves up and down with wheels, controlling the flame and the temperature with impressive precision. 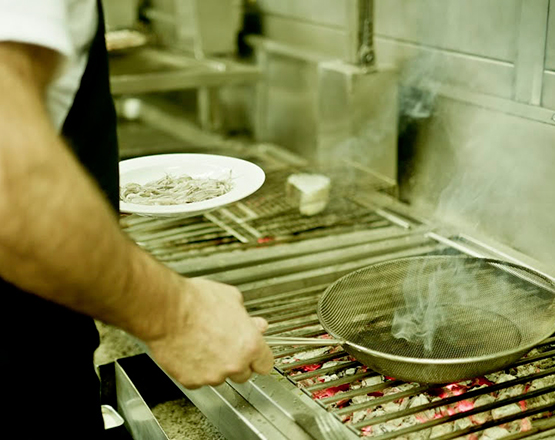 The restaurant’s menu is heavy on seafood and meat, but Victor does more than slap steaks on the barbecue (although the steak of Etxebarri, served with potatoes and a green salad, does merit special mention). Other menu standouts include goat butter, rice with clams, and a cheese ice cream with red berry coulis. But how does one grill milk? Rice? Berries? Part of Victor´s genius is his battery of cookware, most of it custom designed by Victor himself. Rice becomes grill-ready in a laser-perforated sauté pan. A pocked clay pan infuses milk with a smoky taste. Clams are put in what looks like a pound cake pan, whose central hole allows smoke to permeate the shellfish.
The cuisine of Etxebarri has one more secret, and it’s not about the grill. Victor sums it up in one word: product. “Cuisine is about the best raw material, a great product.” he says. “From there, give it the adequate treatment and cook it as naturally as possible. For me, that´s with wood, on the grill.” 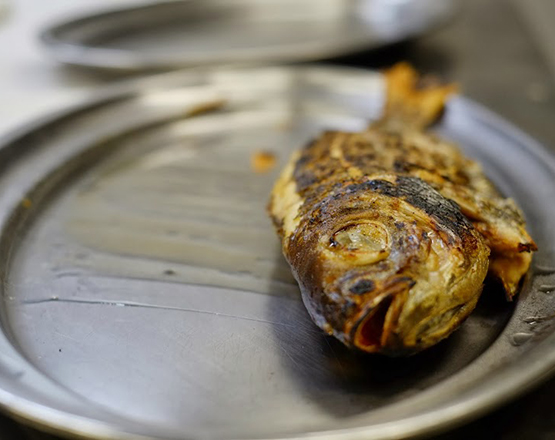 This curiously hands-off approach, inherently local, allows for maximum flavor and minimum fussiness. It also sets Etxebarri apart from its contemporaries in Spain, which stand out more for their tricks and trompe-l’œil than straightforwardness. Incredible produce, a man, and his grill: it is beautifully simple, quintessentially Basque, and it works. 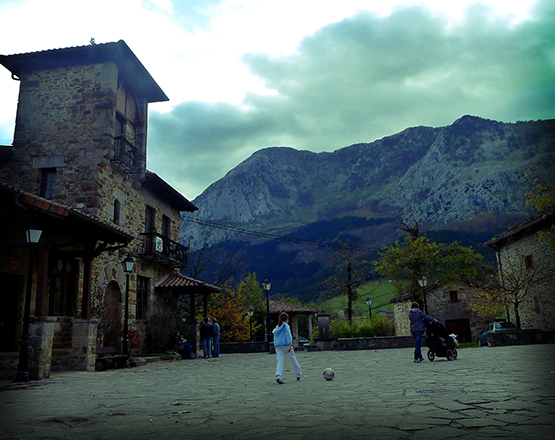