The people of the Sahara have very little. Expelled from Morocco and forgotten by Spain, they live in refugee camps on Algerian soil – declared the Sahrawi Arab Democratic Republic, SADR – with few production possibilities and zero opportunity for development. But they do have something that no one can take away, a tradition that has persevered in time: serving tea to guests. They might not have running water or electricity, and on any given day they might not have goat or camel to eat, but they are never short on tea for visitors. Why? Because tea is more than just a simple drink.

LIFE, LOVE AND DEATH
For the people of the Sahara, offering tea is a gesture of generosity, and accepting it is the polite thing to do. Seated in a circle on the floor, in their small adobe homes, hosts and guests enjoy leisurely conversations accompanied by sips of hot tea that inexplicably quench one’s desert thirst. But guests don’t accept the offer of one tea, but rather three. They should drink three cups of tea during their visit to someone else’s home, each with a slightly different flavor. The first is more bitter (it has less sugar), the second one is sweeter and the third is lighter. All three have a poetic reason behind them. As the Saharans explain: “The first is bitter like life, the second is sweet like love and the third is soft like death”. Life, love and death. This is why the Saharan tea defines the essence of its people so well.

The tea is a green tea imported from China, whose originality comes from the way in which it’s prepared and served. It consists of a ceremony for which certain steps must be followed to give the tea the characteristic flavor of this desert settlement. 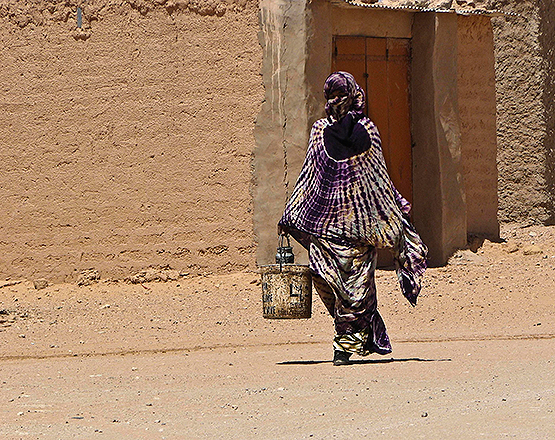 Water is poured into a teapot (berred), which is heated over a charcoal fire. Half a cup of tea is poured into it, although the first serving will be thrown out for being too bitter. Water is again poured into the teapot with the tea in it and this time quite a bit of sugar is added. When it boils, the tea is poured into small glasses (kisan). The contents of the first glass are poured into the second, and so on, several times until achieving the desired head and the perfect flavor. Its golden flavor and white foam, its scorching heat, the shavings of herbs in the bottom of the glass, its extreme sweetness and addictive quality; Saharan tea has everything it needs to make you fall in love with the moment.

The neighboring Moroccans also feel passion about this tea, particularly the mint variety, although their preparation ceremony is not as romantic as that of the Saharans. Tea is also a symbol of hospitality in Moroccan homes, and is always accompanied by delicious pastries or Arab sweets. Generally served in fancier – silver-plated – glasses than what the Saharans use, Moroccan tea etiquette is similar. Drinking tea in the Sahara is not only a question of enjoying a sweet beverage, it is also about experiencing a moment of true pleasure that you hope will never end, whether it is in an adobe hut in the middle of the Sahara Dessert, or at sunset on a terrace on Jemaa el-Fnaa square (Marrakesh) with the sound of prayers from the Mosque in the background. 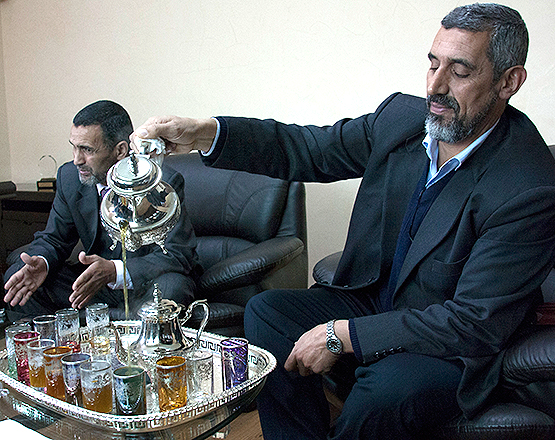