¡Txotx! It’s the word heard ‘round the Basque cider house, bouncing off the stone walls almost continuously throughout the night. At the sound of the word, visitors get up from long wooden tables and proceed to cider barrels to fill their glasses. The txotx, or wooden peg, is removed from the barrel, and the golden liquid begins to stream out into waiting glasses.

Crafting and drinking cider has been an integral part of Basque culture for over 500 years, but just in the last forty it has morphed into a profitable (and enjoyable) custom of dining on steak, salt cod, cheese and walnuts in the shadows of the barrels. The season for Basque sagardo, more sour and less sweet than its anglo-saxon counterparts,  lasts from December to April and marks a local custom of weekend migrations to the tiny village of Astigarraga. Perhaps the only word more important than txotx in the vocabulary of a cidermaker is tradition. 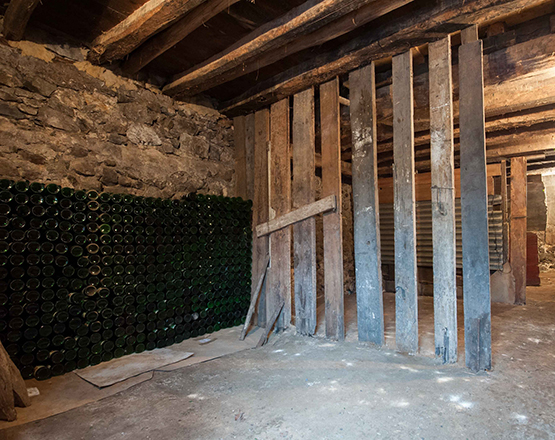 However, one cider house is widening its vision from past and present to include future. And the future looks…bubbly.  Astarbe Sagardotegi, located in cider country’s heart of Astigarraga, has one of the longest cidermaking histories on the books.  “We have written proof dating back to 1563 that documents the making of cider in this farmhouse, and we are the fifteenth generation,” says Hur Astarbe, the public face of this family business. “But we feel that it’s time to focus a bit on innovation—on a new product that is totally different, but also of a high quality. So eleven years ago, we began to work on a new, different product—a cider made using the méthode champenoise.” 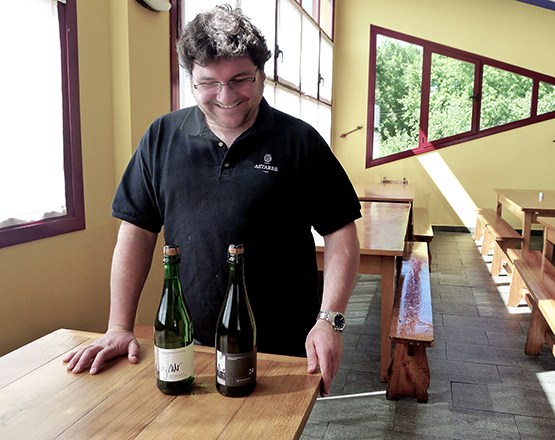 Making a sparkling (alcoholic) cider with the méthode champenoise is a complicated process. First, Astarbe makes a special cider from a base of apples, two cultivars of which, Mendiola and Astarbe, are unique to Hur’s family, growing from seeds passed down from generation to generation.  Then, the cider is bottled and additional yeasts and sugars are added to produce a second fermentation.  After the fermentation, the bottles rest for a year before the process of degüelle, or disgorging, in which the posos (lees) are removed from the bottle before it is topped off with a bit more liquid.

The result is a sparkling (alcoholic) cider called byhur, which has a beautiful golden hay color and a fresh, green apple taste and is slightly less aggressive on the tongue than cava. Astarbe also produces byhur 24, which undergoes an extra year of bottle fermentation that lends it more complex aromas and flavors, which tend towards roasted apple. Both are dry, bubbly drinks, perfect for pairing with salty snacks, fish and seafood, grilled meats and desserts. 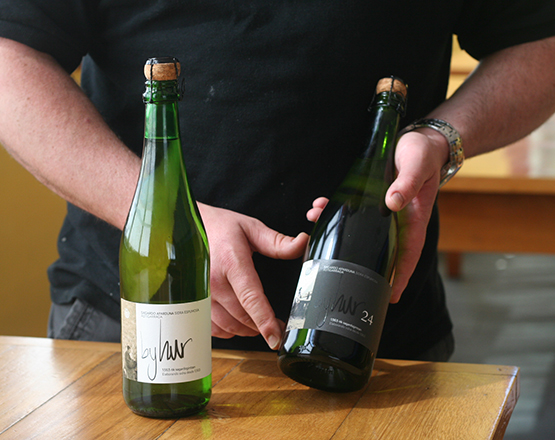 Cider plays a starring role in the history of the Basque people.  The famed success of the Basque people on the open seas has been attributed to the vitamins they got from cider. It’s a major industry and a mainstay in the dining culture of the wintertime.  This doesn’t mean the road is easier for the bubbly version, however.

“We are talking about a product that is totally new to the market, one that nobody knows,” says Hur. “People are trying to compare it with either cider or champagne, and the truth is it’s neither. It’s totally unique.”