A short boat ride away from the coast of Hiroshima is the small picturesque Miyajima Island, one of the top three scenic spots in Japan. The island used to be known as the Island of Gods and therefore its famous floating shrine, Itsukushima , a world heritage site and Otorii gate where built over the water so as not to impinge on the island’s sacred soil. This romantic island also offer the possibility of walking through the Virgin Forest of Mt. Misen, discover numerous preserved shrines, temples, historical monuments…and trying out some delicious oysters. 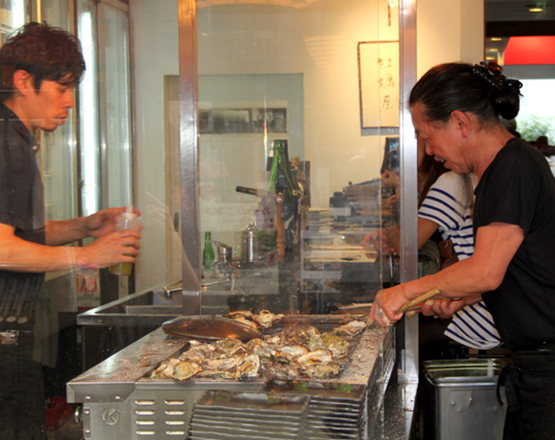 Miyajima has two famous signature dishes: grilled oysters and grilled conger eel “anago-don“ served on a bed of rice. Both can be found in many restaurants on the island and in the street between the railway station and the ferry port over on the mainland. The busy Omotesando shopping street has Miyajima no Kaki-kun: an oyster restaurant where M. Yamada relentlessly cooks the piping hot oysters day after day. The oysters are local ones, harvested from the many rafts that float in the bay. “Grilling oysters must be done just right,” says M. Yamada who keeps an eye on each and every oyster. Also, his restaurant is the only place where you can get oyster gratin, an opportunity not to be missed. 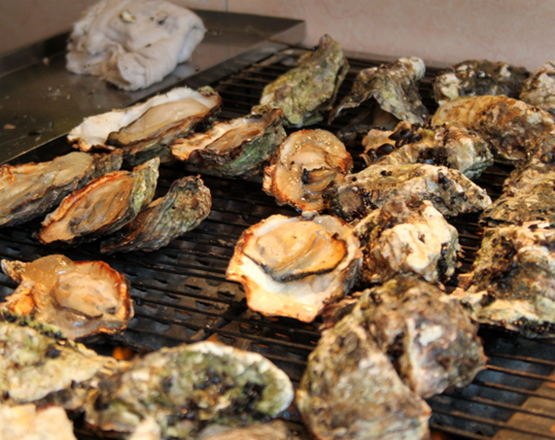 Those oysters from Miyajima are obviously different from some Spanish or French ones. They are not petite, so they won´t dry out too fast on the grill and they are tasty and rich. Customers can also have the oysters with some slices of lemon or buy bottles of ponzu (a dressing made of soy sauce, citrus juice and dried bonito). If you feel like having them plain then all you would have to do is use a knife, separate the flesh, enjoy the oyster and throw the shells in buckets under the table!

A few streets away from Mr. Yamada’s restaurant you can also find a small shop that offer a slightly different version of grilled oyster since it comes on top of a little rice ball. Both are covered with a “secret” soy sauce mix sauce. It’s moderately salty and has an incredible umami flavor. Have a sip of locally brewed dry sake and relax watching the beautiful sunset on this magical island. 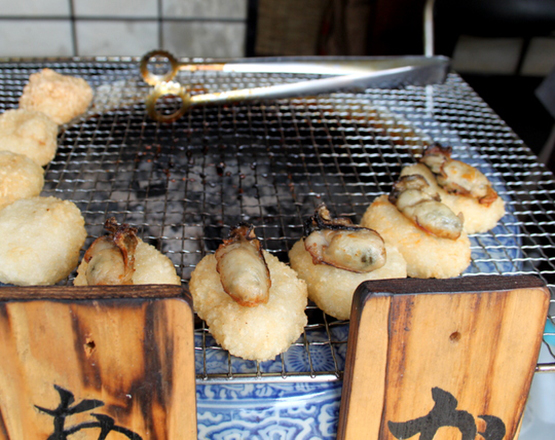