Spain is a country of pork. Jamón curado, jamón serrano, jamón ibérico…but always, always jamón. The pig that gets the most attention around these parts is the black-footed Iberian breed, whose legs and other body parts get cured for months in dry Spanish air. However, in the muddy fields of the caserío Eguzkitza, outside of San Sebastián, the artisans at Ezkurtxerri have a different focus.

Patxi Subijana, owner and head farmer, has spent his whole life in the field, dedicating the last 17 years to raising pigs. Agurtzane, his daughter, returned home after graduating university and decided to take the path less traveled. Instead of applying for a 9 to 5 desk job, the twenty-something decided to join her father on the family farm. “Working with the pigs is really satisfying,” says Agurtzane. “The pigs all have their own characteristics and peculiar stories.” And Ezkurtxerri is not your average office—the pigs mandate the workday, and when it’s time for a birth, that can mean a workday that begins at six in the morning and lasts until midnight. 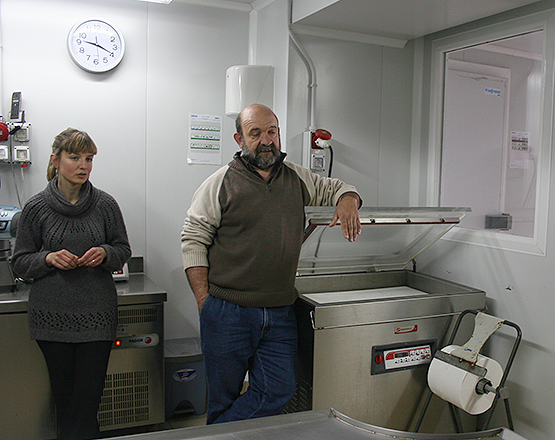 The land surrounding Eguzkitza is nearly twenty acres of oak trees, with plenty of greenery, shade, and acorns—the perfect place to raise pigs. When the decision was made, the family had their raison d’etre clear. “We don’t go for quantity, we go for quality,” says Patxi. This means selecting pigs not for reproductive capacity, but for superior meat.

At Ezkurtxerri, the grounds are overrun with pure heritage breeds. One of these breeds is the Euskal Txerria, the Basque version of the famous Ibérico black-footed pig prized for its meat and even more so when kept on a strict acorn diet. Ezkurtxerri added this near-extinct race to its pig farm in 2011, hoping to not only keep the race alive but to benefit from its superior pork.

Euskal txerria pigs are prized for their well-marbled meat, with its high, well-distributed fat content. They have a full four centimeters of fat under their skin, as well as an above average marbling rate. Those prancing through the fields of Ezkurtxerri even look different—long ears flop over their eyes and faces, while their skin is mottled with large black splotches. 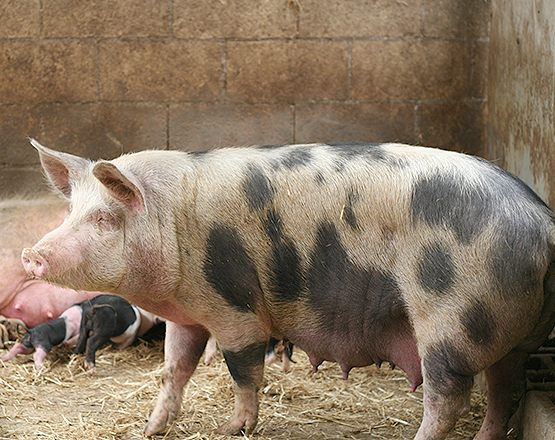 This is because they come from a unique race, with a murky past. Ancient texts reference a cerdo vasco, or Basque pig, and suggest that it descended from pigs native to the French pyrenees and north of Spain. At the turn of the century, there were more than 100,000 of these pigs roaming around; but as more productive species were brought in, by 1952 the number had dwindled to 1200. In 1989, there were 25 euskal txerria left. But with interest from farms such as Ezkurtxerrri, the future looks brighter both for the race and for ham lovers. 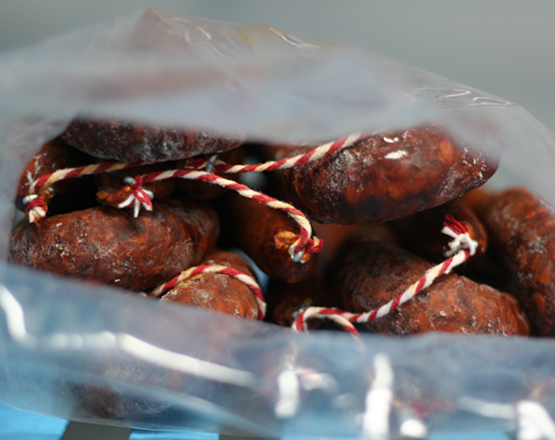 The difference at Ezkurtxerri is more than pedigree— their heritage pigs are given their due, raised slowly and in the open air. For the farm, this means a lower production and limited capacity, but the impact on flavor is worth it for the Subijanas. Unlike in factory farms, the pigs are allowed to graze in the mountain and supplemented with natural whole foods such as barley and beans. “All this makes our product different,” says Agurtzane. “The meat is super juicy and flavorful.”

This allows the Subijanas to experiment with some truly delicious innovations. While their range of pork products includes the typical pork sausages and sliced ham, they also vacuum pack partially-cooked suckling pigs, which upon opening are ready to be crisped up and served. And any of their products can be ordered online, which is a big leap here in the Basque countryside.

It appears that this willingness to innovate and uncompromising commitment to quality is working, according to Patxi. “What we make is sold. What we need is pork.”