Humans have been adding meat to fire for millenia. Nearly every culture has its own meat-plus-fire dish, all the way from Argentina to Korea. In the United States, this technique goes by the name of barbecue, and it is most basically defined as the cooking of meat over smoldering coals.

It’s a dish that is synonymous with summer, and eaten and appreciated all over the United States. The South, however, has a barbecue obsession that is incredibly developed. Crossing a state line can mean a different meat, a different sauce, and a different garnish.

Unlike most culturally important dishes, barbecue is not a dish that your mom made best. Barbecue has a history intimately tied to the African-American culture, as the lengthy labor involved in whole-animal roasting was often delegated to a house’s servants. Barbecue was also often a business opportunity that required little to no overhead. The fact that no one’s mother was cooking up ‘cue means that the allegiances, and styles, tend to be tied to geography. And the general consensus is that there are four categories:

CAROLINA STYLE BARBACUE
In the Carolinas, barbecue is always pork. The meat is smoked either as a shoulder or a whole hog, then pulled and moistened with vinegar. But there is a slight disagreement when it comes to saucing style. In parts of South Carolina, you get a mustard-based sauce, whereas in the East you might find just a bit of vinegar sauce. The most ubiquitous garnish of Carolina barbecue is a side of coleslaw, chopped and dressed cabbage. 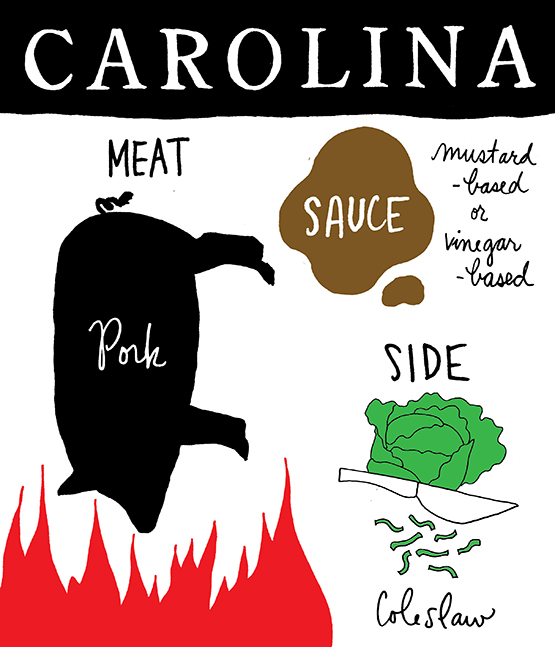 TEXAS STYLE BARBACUE
Texans are proud of their barbecue, and they believe unyieldingly in brisket, a beef or veal cut that comes from the chest area of the cow. The epitome of Texas-style barbecue is the Central Texas style: meat is smoked and served naked, no sauce in sight. If you do get a sauce, it tends to be on the side, for dipping. And as far as garnish—a slice of white bread is a common afterthought. The quality of the meat is the focus. 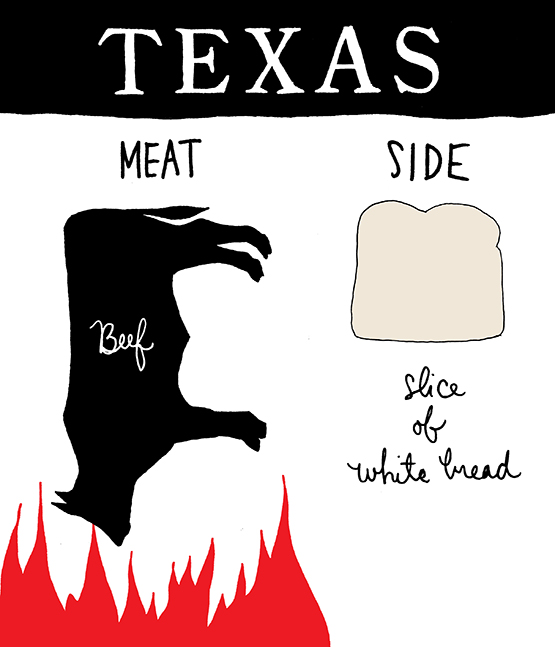 KANSAS CITY STYLE BARBACUE
Kansas City is another basic style of barbecue, and tends to be the most open of the styles. Pork or beef (or even chicken) goes. The trademark is their sweet, thick molasses-based sauce. Another key component of Kansas City are something referred to as “burnt ends”, the crispy tips that are naturally more cooked (aka burned) than the rest of the brisket. 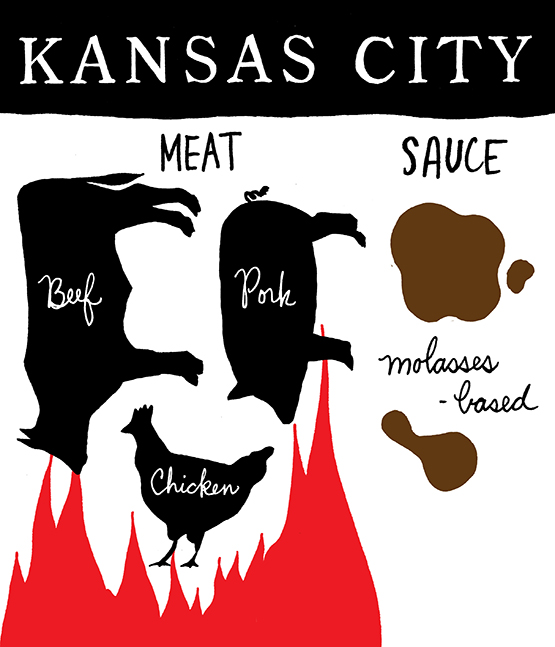 MEMPHIS STYLE BARBACUE
This one is my favorite. Why? One can only suppose it has to do with the proximity of Memphis, TN to Alabama, my home state. Memphis-style barbecue is only pork, and it’s always accompanied with a sweet tomato and vinegar-based sauce. The pork comes in a few cuts and styles, often on the same plate: there are ribs, but there is also meat that is pulled, tender, and served in a sandwich form. 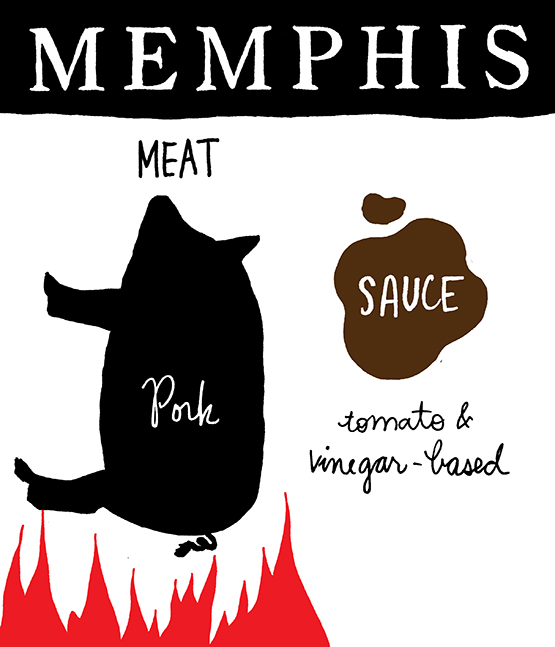