Vermouth. The word conjures up images of dusty pantry shelves and perfectly good martinis gone bad. In Spain, however, vermouth is a long-standing, beloved aperitif that is experiencing a resurgence in popularity.

For Spaniards, vermouth has never been about mixology —it’s always been an appetite- opener enjoyed in bars among friends and family. Spain, and Cataluña in particular, has a wealth of small bodegas that craft vermouth to sell by the bottle and barrel. And the country is accordingly enamored of the drink “For me, having a vermouth means getting together in a bar with relatives and friends on a day off, around 12:30 or 1:00 to drink vermouth (or beer and wine) and snack on something light,” says to Mikel Iturriaga, food writer for El Pais. “It’s a habit I acquired as a child, when we would go have a drink after 12 o’clock Sunday mass at a bar near the church.” 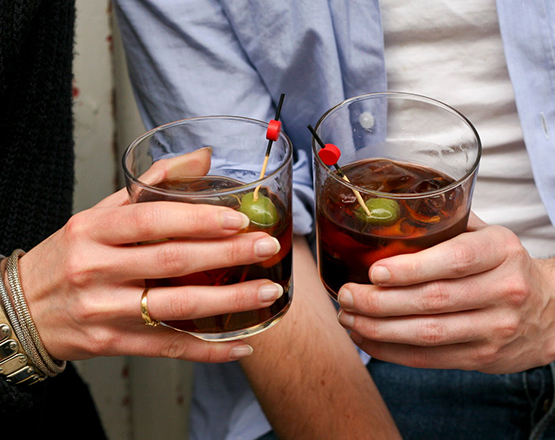 All old things are new again, and the latest demographic to demur to the aperitif is the mid-twenties Spanish hipster. Vermouth has joined mustaches and vinyl as a former old-man tradition that is suddenly so now. “Until recently, it was an old person thing, but lately it’s experiencing a revival,” says Iturriaga. “I guess young people have discovered that as an activity, it’s perhaps more enjoyable than being dead in a bar at 3 a.m.” Case in point? Elle Spain featured vermouth in the April issue; every month a group of fixed gear bicycle lovers meet for a ride and vermouth in Barcelona; and one of the Adriá brothers’ latest ventures is a bar dedicated to the drink called Bodega 1900.

The ‘invention’ of vermouth is often attributed to 16th-century Italy, although fortified wine has been used for millennia for medicinal purposes. At its most basic, vermouth is a wine that has been macerated with various herbs, combined with a spirit like brandy, and sweetened with caramelized sugar. Under European Union regulation, vermouth must contain wormwood, the herb whose German name, ‘wermut’ is believed to be the origin of the term ‘vermouth’.

When it comes to vermouth, there are some important dos and don’ts built into the social structure of ‘fer un vermut’, the Catalán term meaning ‘have a vermouth’. A codified set of cocktail rules, they can initially seem indecipherable to an outsider. However, they are a pleasure to learn.

Rule #1
This is an aperitif. That means the acceptable vermouth-imbibing window falls before mealtimes: from approximately 11am to 2pm and, less common but still acceptable, 5pm to 8pm.

Rule #2
Vermouth is not an ingredient in a fancy cocktail. It is meant to be savored alone. The traditional accompaniment for a vermouth is ice, a slice of orange, and an olive.

Rule #3
Snacks can be eaten along with your vermouth. After all, vermouth is appreciated for its appetite-opening qualities. Snacks should be light, fatty, and salty. Often bars will hand you a small plate of potato chips or olives to accompany.

Rule #4
Vermouth is much, much more than just Martini. No one can fault the incredible market share of this Italian mega-brand. However, just one taste of a smaller, artisan vermouth often proves to be a revelation. “I opt for small-batch vermouths, the more homemade, the better. They are less syrupy and pair better with everything,” adds Mikel.