Pulpo, or octopus, is to Galicia as soccer is to Latin America: almost a religion. And if people there are divided between Maradona and Pelé fans, here we classify ourselves by those who like octopus the way its prepared on the coast, and those who prefer how it’s prepared inland. Because, as strange as it might seem, the most important towns for pulpo in Galicia are located nearly one hundred kilometers from the sea.

There is a logical explanation for this. During the Middle Ages, the large inland monasteries, like that of Oseira, possessed lands in coastal areas and collected taxes on certain activities. From here they were sent shipments of grains and vegetables, as well as products from the sea. And, one of the marine animals that best held up during the journey, after a stint at the coastal drying warehouses, was octopus. The monasteries served as ‘middlemen’ for this dried octopus, which was sold at nearby markets, where it was dressed with Spanish paprika and olive oil that was brought by traders from La Maragatería or Extremadura. This was the origin of pulpo á feira, meaning feria, or market-style octopus. 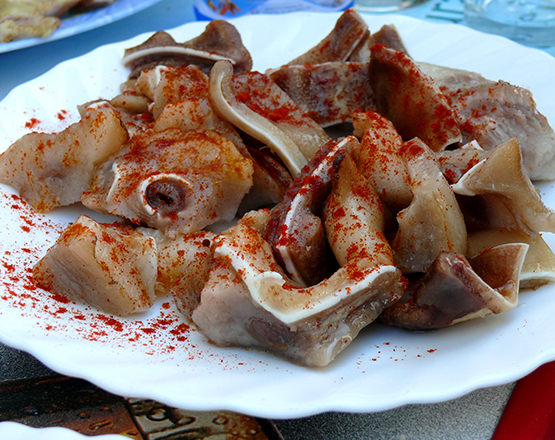 This is why today’s octopus capital is O Carballiño, in Ourense, and the most famous pulperías, or octopus houses, are the ones found in the town of Arcos, in this same area. This is also why you can find wonderful stands on Sundays along the streets the Ourense capital, as well as in the markets of Allariz, Maceda, and many other towns in the province of Lugo and inland in the province of La Coruña. If you’ve ever walked the Camino de Santiago, than you’ve surely tried octopus in Palas de Rei or Melide.

But before continuing to digress, we should get back to the topic at hand. In the region’s interior, octopus is prepared according to a recipe that is deeply rooted in history, but, for obvious reasons, the coast hasn’t been left behind. It is here that the recipe selection diversifies and we can find dishes like octopus in caldeirada (octopus-potato stew), a la mugardesa (with a pepper base), in the style of A Illa de Arousa (with a potatoes and onion base), in stews, and in a wide variety of other adaptations.

Therefore, eschewing once again the portions of rubbery octopus served at tourist hot spots, we head towards Ría de Muros and Noia, and from here to the southern foothills of the Serra de Barbanza (mountains), a sort of natural frontier between Rías Baixas (which technically also includes Noia) and the Costa da Morte. Summer vacation spots here are much more modest and yacht clubs are scarce. For 10 months a year, these are just are small fishing villages centered on coastal fishing. 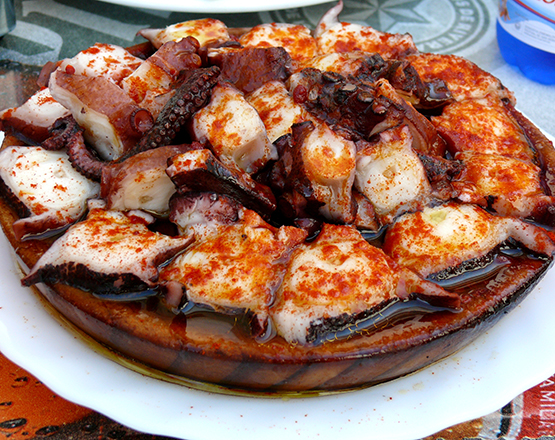 Porto do Son lost most of its charm a long time ago. The real estate bubble wreaked its havoc even here. Even so, it still maintains a marine atmosphere and there are corners of its historic district that are worth wandering around in, even if it’s only to climb up to the A Atalaia chapel that is perched on the cliffs. The port, which specializes in fishing for octopus, horse mackerel and cod, boasts some more modern bars, primarily aimed at the summer tourism industry, as well as more than a handful of taverns that have been here for as long as anybody can remember.

One of them, facing the sea, is O Chinto. Despite the fact that it’s located on the ground floor of a stone house and has a surprisingly tall door, it’s not the most beautiful place in the world. The service is what one would expect from a tavern of this sort, and its selection falls along those same lines: a lot of tapas made with fish, a few with meat, octopus, calamari and little else. But everything is well made and honestly priced and, above all, there are a few specialties that are really good.

The pig’s ear with Spanish paprika is delicious, as is the raxo (marinated pork loin). The steamed mussels can be a good option, given that we’re in the heart of the (mussel) production area and they are the cheapest things on the menu. The callos or tripe, if they’re on the menu, are another sure bet.

But surpassing all of this is the calamari, which is always incredibly fresh, and the octopus. The octopus alone is reason enough for a trip. I’m not much for absolutes, so I won’t say that it’s the best octopus in Galicia. Inland folk would put their hands on their heads and those on the coast would propose another hundred places – and all of them, probably, would be partially correct. But the pulpo á feira at O Chinto is a very serious thing: perfectly cooked, with just the right amount of resistance upon biting into it, a perfect touch of olive oil and Spanish paprika, accompanied by a decent bit of bread…

A good pulpo á feira, when it’s prepared and served correctly, is happiness. And for me, eating it at el Chinto is pure joy.

Bar O Chinto
Avenida de Galicia, s/n (across from the gardens in the port)
15970 Porto do Son