Two friends are on a motorcycle. They stop at a stoplight. One is a European. The other is Indian. Both of them watch a common scene in India: hundreds of pigeons swarm around a person who holds a metal plate full of grains of wheat in one hand, while scattering the grains with the other. “Are they feeding the pigeons? Did you know that’s illegal in my country?” asks the European. “Illegal? How can it be illegal to feed animals?” answers the Indian. I don’t know which of the two is more surprised.

In India, feeding the pigeons is not something you can do; it’s something you must do. It is a duty to feed each animal you find in the street. This comes from the old belief in reincarnation: each person must pass through numerous lives until his or her soul, completely evolved, joins with the Divine Light, the light of Brahman, god the creator. And of course, those many lives include having been an animal. 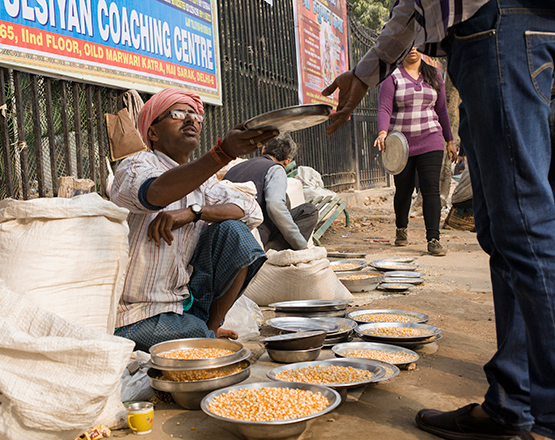 “FOR ME, ANTS ARE PEOPLE”
That’s why it’s very common to see all kinds of animals wandering the streets (cows, pigs, goats, dogs, cats, birds…). They are fed by passers by. One time a friend stopped to feed breadcrumbs to some ants. “Maybe they are just ants to you, but to me they are people. They are only waiting for the moment to be born as human beings.” Stunned, I had no choice but to squat down and give them some of my food.

The transmigration of souls is closely related to the concept of karma: all actions carried out by man determine the conditions of this life and following lives, in the same way that what was done in the past determines the conditions of the life being lived now. So in order to have good Karma, you have to do things that tilt the scales to the good side. In pagan terms, it’s a way to earn points.

GOOD KARMA
The rule could be applied to all animals, but the Hindu culture is especially superstitious when it comes to pigeons. So you see the same scene in every plaza, as small as it may be: a blanket of yellow grains barely lets you see the ground beneath it, and before the pigeons can finish the feast, more metal plates are filled and emptied for them. 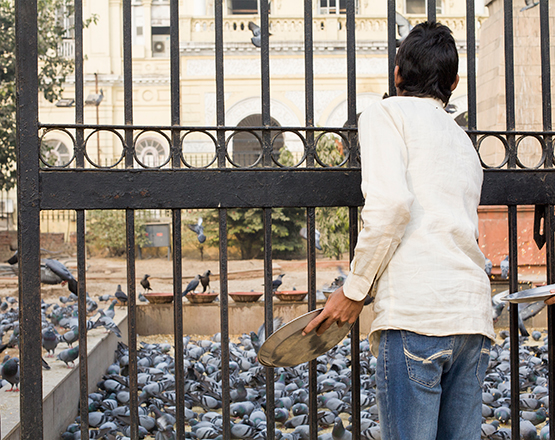 There are many religious groups who give special meaning to the feeding of these birds. Some hold the belief that they will never be hungry in their next lives if they feed the pigeons in this life. Others believe that when you die, your soul takes on the shape of a pigeon, so by feeding them, you are caring for the souls of your ancestors.

Although you can feed them anything, not everyone walks around with breadcrumbs in their pockets, but it is always easy to find someone selling pigeon food. In the corner of the plaza, or on the street, sellers line up between bags of wheat or dried corn to sell their grains. They work non-stop, since most people who pass by stop to buy a plate. For ten rupees (0.10€), you can have your problems with karma resolved. Why not give it a try?

Leave a Reply to other Cancel reply