From the first cheese until Charles De Gaulle’s famous line about France (How can you rule a country that has 246 different types of cheese?”) at least 8, 10 or 12,000 years (we’re not going to get too picky) have gone by since a clever and hungry human from the Middle East (supposedly) discovered that with time, milk turned into something different.

With the taming of goats, sheep and cows, the white mammary liquid of those animals became a common food. We can imagine a smelly semi-nomad carrying a winskin with milk that curdled (the hotter and hotter it got) and later spilling out the leftover liquid. The curd solidified and could be better preserved! And what jumps for joy he must have given when he accidently discovered that rennet, the digestive enzyme extracted from the stomach of a calf or kid, improved the process! They would have named him the the First Shaman, at least.

Cheese had been born, among noxious stenches that would make cabrales seem like baby cologne. But there it was. And it’s still here.

Furthermore, cheese could have played a decisive role in the start of the Neolithic Revolution, according to some historians. Many individuals suffered from lactose intolerance, a problem they solved with the production of cheese and butter, which they stored and contributed to the fact that people became sedentary. 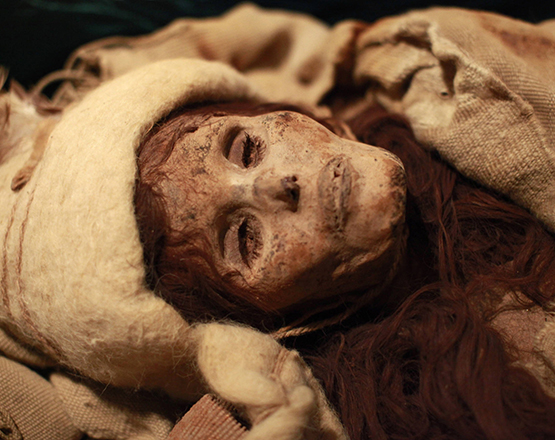 MORE THAN CURED
Up until this point everything is historical-anthropoligical supposition, but now let’s talk about evidence. German researchers have discovered the oldest known remains of cheese. Dated? About 3,500 years ago. Place? A necropolis in northwest China, where a mysterious Bronze Age village buried dozens of their dead.

The bits of thousand-year-old cheese appeared in some of the mummies’ sarcaphagai from there. The preservtion is thanks to the area’s climate, in the middle of the Taklamakan desert. The mummies were buried in a type of wooden boat wrapped in cowhide, and wrapped so tightly that it’s almost as if they were vacuum packed. That protection along with the extrememly dry air and the characteristics of the land safeguarded the first known samples of cheese, scattered across the chest and neck of some mysterious mummies.

Food for the next life? Offering for the gods? The reason for the cheese’s presence in the burial, which was apparently made mixing milk with some type of bacteria and yeast, is unknown, but scientists are surprised by the fact that it was preserved.

* The parmesan you like so much was born in Italian monasteries around the year 1000. But, where did its characteristic white spots, responsible for its grainy texture, come from? They are tyrosine chrystles, an amino acid resulting from the breakdown of the protein produced when this Italian cheese is aged until it reaches its optimal flavor. Its origin is the same as that of the small white crystals that appear in cured Iberian ham when cut, and indicate the quality of the product.