Galicia has traditionally been considered a humble region, without much economic potential, where there was seldom any leftover money to invest in expensive ingredients for making sweets. This is why pastries here are simple, at times Spartan, and based on everyday ingredients: bread dough, eggs, milk, pork lard, sugar, honey and little else. Of course, one would have to write an entirely separate chapter on recipes that originated at convents, such as the famed tarta de Santiago, but it’s enough to remember that these things are exceptions to the rule of humbleness and the economy of means.

Therefore, a good part of traditional confectionery is one that employs the baker’s oven. Not much is fried here. Oil was expensive and in scarce supply. Nor were nuts used in excess, as they would have affected the final cost of things. However, by taking advantage of the residual heat of baker’s ovens, it was possible to turn out flavorful recipes that are still among the favorites of bakery customers today.

BEYOND EMPANADAS
Noia, located at the end of the river that bears its name, is mostly known for the clams found buried in its sands. It is also known for its empanadas, something that also underlines the importance of the bread industry in this town, which served as the historic port of Santiago de Compostela. Empanadas are in large supply, and made in many other places in Galicia. But, if we’re talking about empanadas made with scallops, calamari (which can even be stuffed), cod with raisins… if we’re talking about corn flour empanadas filled with xoubas, the tiny sardines that have a cult following in the Rías area, or the clams cooked in their shells so that, when they open, their juices infuse the dough with their aroma… then we’re talking about Noia.

And from these same ovens, which are also used to bake the mythical roscas, a confection of ancient origins has survived for centuries, the calleiro. This is a very simple specialty; a type of bread pudding seasoned with spices and raisins, or apples, which provided a use for leftover bread. In fact, given all this, it might seem like there’s nothing more to this dish than the mixture of spices kept secret by each baker. A bread pudding. What’s so special about that?

Let’s focus on the name, calleiro. We could translate it (from Galician) as meaning to ‘curdle’ or ‘to set’, and this alone provides us with some clues. Originally, a calleiro was cooked in a pig’s stomach that was filled with a batter made of eggs, bread and spices, and then left to cook for hours. The detail involved in its elaboration is testament to just how old this recipe is – one that is, incidentally, related to other more well-known recipes that are still followed in the province of Pontevedra. I’m referring to the bandullos (stuffed ‘guts’), found in the areas of Caldas de Reis and Ría de Pontevedra. There, the dough is stuffed into a dried pig’s bladder, which is then rehydrated, while the spices are replaced with néboda, a local herb from the mint family. 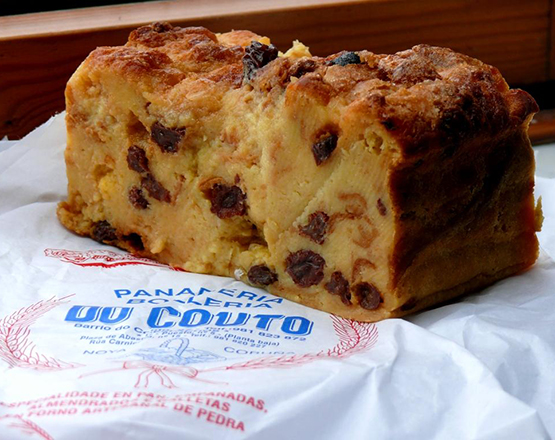 Today, no one cooks this sweet in an animal’s stomach anymore, and the truth is that there are few people that still refer to it as calleiro. But this bread pudding, or “Noia pudding” can still be found on weekends in all of the town’s traditional bakeries. Though there are fewer and fewer ovens where it is still prepared, one can buy a portion of it at the Panadería do Couto bakery on Rúa da Carnicería (street) – although one is never enough. While there, ask for a portion or two of whichever empanadas catch your eye. And, while we’re on the topic of sweets, the apple pastry that is scented with a touch of cinnamon, might be a good option as well.

The O Couto bakery is located on a side street in the city’s historic district, one of those narrow passageways that weaves between Gothic and Baroque houses and maintains a feeling of being from another time. Stopping here to try an ancestral sweet like the calleiro, gives you the opportunity to enjoy a complete gastronomic experience that, once you’ve tried it, will bring you back for more every chance you get.